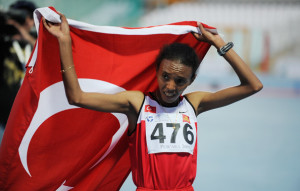 When, this summer, IAAF announced 28 athletes failed the doping tests during Helsinki and Osaka World Championships, the world silver medal on 1.000m, Elvan Abeylegesse, was in the list.

The athlete declared she was clean and she asked for a second test summoning IAAF stating that technical mistakes had been done in the analisys. Tuesday, the Turkish Federation announced it has banned the athlete for 2 years because she resulted positve for a steroid, the stanozolol.

Abeylegesse’s agent declared that the Turkish Federation took this decision out of complete ignorance since there are legal proceedings ongoing and it is not possible for the federation to take such decisions.

We will see who “will win” this battle, for the moment the middle-distance runner is banned and WADA may decide to increase the punishment from 2 to 4 years.