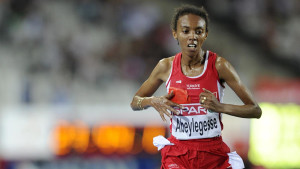 Yesterday came out the first of 28 names of the athletes found positive after IAAF’s re-analysis of urine and blood samples took during Helsinki 2005 and Osaka 2007 World Championships; it’s the Turkish Elvan Abeylegesse.

Turkey Athletics Federation after announcing Abeylegesse would not have been in the plane for Beijing due to a “last minute injury”, after some silence hours confirmed to have received comunication from IAAF that Abeylegesse is among the 28 athletes tested positive.

The Turkish athlete, who should renounce to a silver medal won on 10.000m in Osaka, declares to be innocent and affirms she neither took performance enhancing drugs nor thought about doing that.

Abeylegesse asked to re-test the sample B and declared herself disappointed about this news. If confirmed she risks up to 2 years of ban.