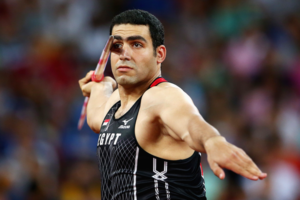 After some days the weight thrower Andrei Toader failed an antidoping test, another case of doping hit the throwers world.

It regards the Egyptian javelin thrower, world silver medal Ihab Abdelrahman who, at this Olympic Games, could hope to award a medal for his country, while now may not participate in Rio.

The sample A, analysed on the 17th of April, tested positive for testosterone, thus the athlete was temporarily banned from his Federation, waiting for the analysis of sample B.

Abdelrahman absolutely denies having ever used doped substances, pleading “a million percent innocent“,  keeping open the option he ate a contaminate integrator. Yesterday evening, during a tv program, he appealed to the Egyptian Sport Minister so as the government help him in solving the unpleasant event.