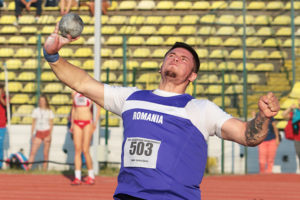 A silver medal won at the Junior World Championships in Bydgoszcz is probably going to be reassigned; it is the male shot put silver one, won by the Romanian Andrei Toader with 22.30m, new national record.

The 4th of June Toader underwent an antidoping test after the Romanian International Championships and the results detected the presence of testosterone. Beause of this, the 1997 class athlete will not take part to the Olympics in Rio with his team.

We also saw the athlete at the Amsterdam European Championships where he managed to reach the final, ending up at the 6th place with 20.26m.

Toader is temporarily suspended and, as it can be read from the Romanian Olympic Committee statement on Twitter, he will see his medals from Bydgoszcz and the Balkan Championships revoked if the tests are confirmed to be positive.