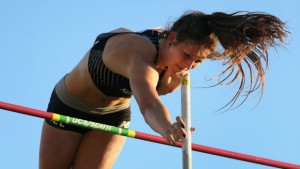 Big news come from the other part of the world, where athletes are in full outdoor season.

After the renews exploit of the australian kid Jack Hale, from New Zealand comes nothing less than a World Record!

Yesterday in Auckland, the young Eliza McCartney, after the competitors quitted the pole vault competition, started to target the U20 world record: 4.63m held by Angelica Bengtsson.

After the overcame of the 4.40m limit, McCartney decided to go straight to the point, asking the bar at 4.64m. As usual in the hardest challenges, we needed to wait the third attempt to see the measure cleared and a 4-year lasting word record being improved, adding a national record dated 1998.

Eliza McCartney moreover conquered the entry standard for Rio de Janeiro, a really important event for the kiwi state, who hasn’t had an olympic pole vaulter since 2004.

Here you can see the video of the amazing vault.