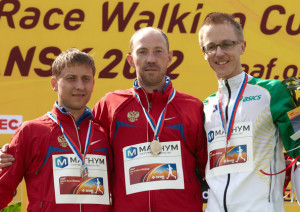 Do you remember about that doping positivities regarding the Russian racewalking? IAAF decided to ask to CAS to evaluate the case because they do not believe the sactions commisioned by RUSADA sufficient, in this spotlight month.

The 2nd and the 3rd of December the new allegations moved by the World Federation will be listened to for six Russian athletes, two of them winners of Olympic medals, because they claim the sanction given by RUSADA to be not correct.

The two racewalkers Sergey Kirdyapkin, London 2012 golden medal in the 50km and Olga Kaniskina, silver medal in London 2012 20 km, were disqualified for three years and two months, but the ban period started at the of the 2012, thus leaving the Olympic medals to them.

The other four athletes are the racewalkers Sergei Bakulin who was suspended for three years and two months but who kept the World Title won on the 50km in 2011, Valery Borchin, banned for 8 years after the second infraction, Vladimir Kanaykin, life-banned for multiple infractions and the hurdles champion Yulia Zaripova who saw part of her results in 2011 and 2012 (London 2012 included) deleted.

After the Russian doping scandal in which many doped athletes have been covered by the State, the criteria the disqualifications were given with will be judged and if Kirdyapkin was to lose the Olympic gold medal would be reassigned to the Australian Jared Tallent.