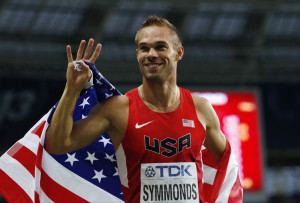 We already wrote about the dispute between Nick Symmonds and USATF and now arrives and incredible news that seems to put a full stop to the story.

The 6 times USA Champion and world silver medal winner refused to sign a contract with USATF forcing him to wear only Nike branded clothes and apparel during all the world championships in Beijing, even in sparetime. This goes against the sponsorship contract he and other athletes signed with their own sponsors.

USATF gave Symmonds a deadline on Sunday noon, and few hours ago the runner tweeted he has been left off the team.


I just received word from @usatf that I have been left off the #Beijing2015 team.

There is no official announcement from USATF, but this would be a really bad ending if confirmed. Symmonds had the courage to raise his voice defending athletes rights, giving the availability to discuss a new contract, more detailed and more respectful for the athletes.

Unfortunately he was alone on this fight and USATF took the easiest solution.

Now his place on the team should go to Clayton Murphy, the following on the rank.