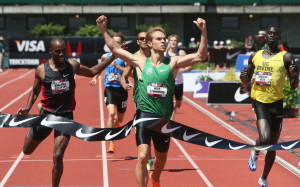 One year ago Nick Symmonds posted a picture of him naked on Twitter to find a new sponsor; now he has the opposite problem. He his in the middle of a sponsors dispute that can cause his exclusion from the national team for World Championship.

The American Team in sponsored by Nike, Symmond’s ex sponsor, but the athlete is sponsored by Brooks since his clever marketing trick.

The problem is that Nike wants that all the athletes who are in the american team sign a contract in which they subscribe that they will use Nike’s items as bandanas, travel bags and socks not only during World Champioship but also during their training phase in Japan. Furthermore they couldn’t pack anything from a conflicting sponsor.

“USATF and Nike are just taking way too much of the pie, so far as to violate my rights as an athlete”. This is what Symmonds thinks about this situation and he doesn’t want to sign the contract; he will wear Nike’s clothings and gadgets only during the races.

Jill Geer, USATF spokeperson, said that 65% of national team’s athlete have individual sponsors that are in conflict with national sponsor but they have a lot of races where they can wear their clothing, like Meetings. To sign this contract is a standard condition to partecipate in championship with the national team.

Symmonds started a fight against Nike and he won’t give up until the document will be rewritten and stopping exploiting athletes who have already sign a contract with another brand.

USATF announced that in case Symmonds decides not to sign the contract he couldn’t partecipate at World Championship and Clayton Murphy, PanAm Games winner, will take his place.