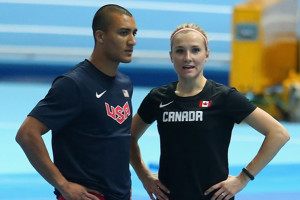 Sad news for Track&Field arrived yesterday evening. The decathlon WR holder Ashton Eaton announced his retirement yesterday. To his side, in the sport as in the life, his wife Brianne Theisen will abandon her career as an athlete as well.

Both of them won a medal during last games in Rio, a golden one for him and a bronze one for her. Ashton Eaton improved the decathlon WR twice, bringing it to 9045 points during the Beijing World Championships in 2015. In the same occasion, he ran the fastest 400m ever in a decathlon, with a time of 45”00.

Brianne Thiesen, instead, won an indoor World Title, 2 World Championships Silver, an Olympic Bronze during her career and she boasts a PB of 6808 in the heptathlon.

Only 28 years old, they leave the international competitions. The words of the WR holder:  “Frankly there isn’t much more I want to do in sport. I gave the most physically robust years of my life to the discovery and pursuit of my limits in this domain. Did I reach them? Truthfully I’m not sure anyone really does. It seems like we tend to run out of time or will before we run out of potential. That makes humanity limitless then, as far as I’m concerned. And I think that’s inspiring.“.

Brianne said instead: “Before every 800m race, I’m in a panic. “Why do I do this? This isn’t fun. I’m scared and stressed out. I can’t do this anymore. I’m retiring.” Then I cross the finish line, am surrounded by my competitors who instantly bring water, high fives, hugs and congratulate me on getting through another heptathlon, no matter the result. […] I instantly get excited for my next heptathlon.”  But after Rio something changed: “I was mentally exhaust. I have never been so grateful to have finished something in my life“.

Sport loses two great athletes, but not their examples of passion, enjoyment and serenity transmitted during these years.