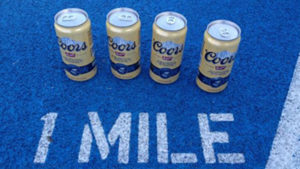 The end of the year is approaching and so it is the most awaited event for all the beer-milers: the 3rd edition of the FloTrack Beer Mile World Championships.

The location will be once again the USA city Austin and the competition will take place on the 17th of December: six of the nine fastest men of the specialty will take part, as well as four of the best seven women.

Among women, the favorite is Erin O’Mara, who holds the current world record with 6’08”: “I can’t wait to go back to Austin to run another beer mile” – O’Mara stated – “I love the event and the city, I want to compete with the strongest athletes of the world and let’s see if we will manage to lower the world record.”

In the 2015 edition two men, both of them Canadian, managed to break the 4’50” wall: Lewis Kent (4’47”) e Corey Gallagher (4’48”). This summer, though, Correy Bellemore, middle distance runner, managed to do something incredible: first, he ran 4’39”, new record, which he further lowered down to 4’34”, a time which seems unreachable for  the opponents as for now.

Kent will try to defend the title conquered last year, even though he will not be the favorite anymore; from what he stated, “experience means a lot“, therefore we are that he will give everything he has to catch the first place: the game is on!