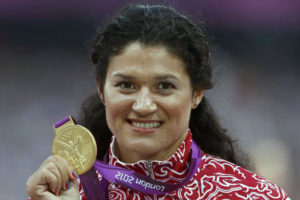 When disqualified because of doping, an athlete sees all his results cancelled and must return his medals, which will be later reassigned.

After Beijing Olympics in 2008, the silver medalist Maria Abakumova (javelin throw) has been found positive at doping control; for this reason she should have given her medal back to CIO but she refused to.

Olympic medals are actually crafted with the name of the winner and can’t be given to another athlete, who will eventually receive a brand new one; that’s why Abakumova addressed to CAS asking to be allowed to keep her medal.

Tatyana Lysenko made the same decision about her London 2012 Olympic gold medal; her husband and coach Nikolai Beloborodov announced that the medal won’t be returned since she won’t go back on track and will always be remembered has an Olympic champion.

The Cio, in its turn, would prefer to have all the medals back, this being mostly a symbolic act, since without valid results any medal is nothing more than a piece of metal.

It’s not the first time an athlete refuses to give back his medal. Irina Korzhanenko (shotput) refused to give back her Athens 2004 medal, as did Jerome Young (USA), gold medalist in the 4×400 relay at Sydney 2000.