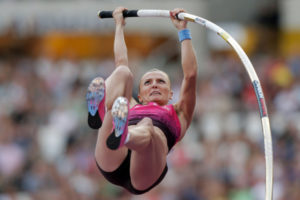 Among the athletes, there is a saying that goes like that: ”If you haven’t run at least one marathon in your life, you are not a true athlete”, in fact, the 42,195 km in honour of Filippide have always intrigued the not experts as well. If this is true, then Anna Rogowska, pole vault world champion in Berlin 2009, has officially become an athlete on Sunday.

In fact, the Polish athlete, last Sunday in Warsaw, concluded the longest Olympic race with fair results, finishing in 3h48’04: not extraordinary time compared with the top ones, but for an “entry level” athlete to knock down the wall of 4 hours is always a great joy.

As said, in 2009 the Polish athlete awarded the title of pole vault world champion in Berlin, in the same year that Bolt established the 100m and 200m World Record, deposing Yelena Isinbayeva who had won the latest two Olympics and two World Championships.

She also got a bronze medal in Athen 2004 and many indoor medals, both in European and World competitions. She still holds the National Outdoor and Indoor Record of 4.83m and 4.85m respectively. Today, she dedicates herself to amateur running and the marathon was part of this program.