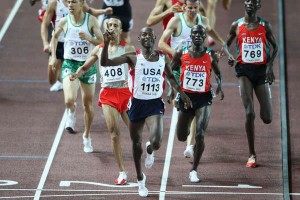 The moment to retire arrived for the USA middle-distance runner Bernard Lagat too.

He announced it yesterday on Twitter; the Berlin ISTAF 3000m were the last competition of its long lasting career which started with the victory in the Palma de Mallorca University Championships in 1999 when he was still dressing Kenya’s colours, the country he was born in.

Yesterday he grabbed the second place with the time of  7’43″63 behind the Kenyan Augustine Kiprono Choge in 7’43″00.

He would have liked to retire at the end of the 2015 but he preferred taking part to its 5th Olympics Games; thus, at 42 years he ends a career rich of satisfactions and great results.

A well suited singlet for my last track race of my career. Thank you All. Danke & Tschüß! #ISTAF2016 pic.twitter.com/ehBQiZnbKJ