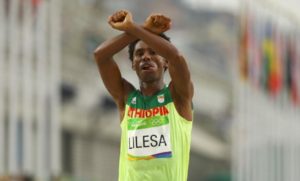 Often Olympics and big sports event have been used by athletes to send messages to the world, to protest. Let’s think about Mexico City 1968, where Tommy Smith and John Carlos raised their fists against the black discrimination in the United States, or more recently the russian athletes who kissed on Moscow 2013 podium to show dissappointment to the laws against the homosexuals approved by the russian government in that days.

In Rio 2016 another athlete used a competition as a stage to show solidariety to his connationals: it’s the men’s marathon silver medal Feyisa Lilesa.

Crossing the finish line the Ethiopian raised his arms shaping an X; this symbol wanted to raise awareness on the Oromo protest that is ongoing in Ethiopia since 2014. Oromo is the biggest etnic group of the country, but since two years they are victims of persecution. During the non violent protests more than 400 persons have been killed.

With his gesture Lilesa wanted to show which side he is on, but this can cost him a lot. In an after competition interview he explained that once back in Ethiopia he could be prisoned or maybe killed.

Now the marathoner will try to obtain a VISA to live in the states with his wife and two sons. The case is really similar to what happened during World Junior Championships in Eugene two years ago, where 4 Ethiopian athletes ran away for the fear of coming back home again due to protests they made against the government