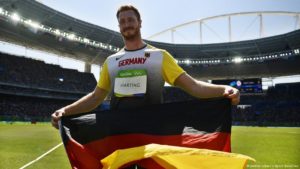 The event of the most ancient among the throws, the men’s discus throw, has ended.

The first shots were not surprising, most likely for the absence of some relevant names of the event as the German Robert Harting and the Iranian Ehsan Hadadi, not qualified for the final. Since the beginning, the best shot came from the most expert among the discus throwers, the Polish Piotr Malachowski, who shoots 67,32m. Weak attacks from the opponents, far from being an effective threat.

Later on, the competition took off after the invalid shot of Daniel Jasinski that surpasses the golden line set by the direction. The German, not sure about the validity of the throw, asks for the measure, request that was denied. Afterwards, Martin Kupper reacted as well, the Estonian athlete shot really close to the best result but he was not able to controll his feet that ended up over the platform, red flag for him.

Malachowski kept going undisturbed with an awesome series of three shots over 67m, the best is 67,55m. At the last shots, Kupper scared (but not that much) surpassing Jasinski and Harting and placing himself behind the Polish athlete. It seemed the game was over for Piotr, but, apparently, the German athletes likes in making spectacles and at his last turn Jasinski got horribly close to the highest step of the podium shooting 67,05m that ensured him the second position.

At this point, Christoph Harting, younger brother of the great Robert, leading Olympic champion, entered in the track. Déjà vu: Malachowski leads and Harting chasing, but this time is the younger Harting. Each event reminded the world final of Berlin 2009. History repeats itself. Christoph surpassed of around 1m the Polish athlete reaching his personal best of 68,37m as well. No reaction, he is the new Olympic champion. Leaving the track, Malachowski went towards the German athlete opening his arms and congratulating with the younger Harting.

Germany celebrated for two athletes on the podium, everyone was waiting for a tear of shirt, but there were only bows to the public and to the cameras, because he is not Robert, he is the new Olympic Champion, Christoph Harting.