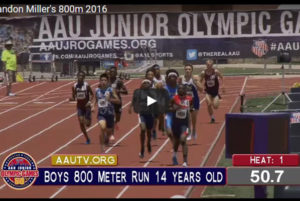 AAU Junior Olympic Games in Houston have been the stage of the new World Record, class 14 years old set by Brandon Miller on 800m.

Thursday, the young American athlete speeded the two race of tracks cleaning the first 400m in 56″41 and completing the event in 1’51″23, succeeding in running faster than each athlete in the races, even in the classes 17-18 years old.

The Norwegian Jakob Ingebrigsten, the brother of the new European champion of 1500m, last year established the previous record at 1’52″60; but Brandon was able to considerably better him.

Some days ago, Miller set his PB during the batteries running in 1’53″64, he was not thinking at all at the possibility to lower it by two seconds.