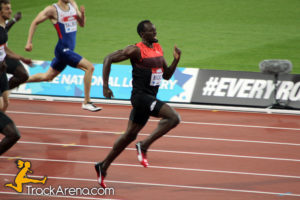 One of the most applauded stars of XXXI Olympics is, without any doubt, Usain Bolt, the Jamaican arrow that is in Rio since Wednesday ready to go down to the track for his last Olympic Games. Even before to stack up the tartan with his spiked shoes, the Jamaican bolt released unexpected sentences: in fact, Bolt stated he is in his best shape and he can clear 9″60 on 100 meters, time that makes each opponent arrived in Rio to challenge him on the “queen of the distances” shiver.

After the femoral biceps accident that forced him to stop for a while, Bolt succeeded in winning 200m in 19″89 during the stage of Diamond League in London and now he is aiming at winning for the third consecutive time three Olympic golden medals.

“I’ve never tried to foresee the time I can do during an event” – the world record holder stated – “because you don’t know what will happen, but for me, for the shape I’m in now, I think I can definitively run 9″60. I feel much more confident now than last year.”

If everything should be true, the Olympic record on 100m, i.e. 9″63 set by Bolt at London 2012, would be on the line. The opponents are forewarned, let the show begin!