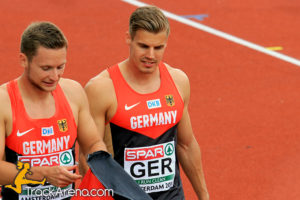 New event, new National Record set by the German Julian Reus. After the NR established this season on 100m in 10”03, the sprinter succeeded in further bettering himself.

Yesterday, Reus took part in a meeting in Mannheim and, flying on the finishing line, cleaned in 10”01; he is getting closer and closer to 9”, right now, the only white athlete who went below 10″ is the French Christophe Lemaitre (9”92).

During this season, he demonstrated to have a great perseverance in his results and to be in steady growth; we will see him running in Rio, who knows what he will be able to do.

In the same competition, the fellow country girl, Tatjana Pinto, managed to set her PB. In May, she was able to run in 11″17, whereas, yesterday, she cleaned in 11″00 reaching the seventh position of the German All-time ranking.