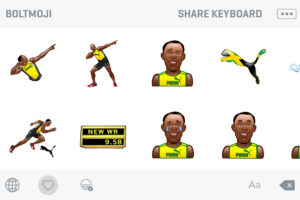 Olympic Games in Rio are closer and closer and the support for the best athletes are beginning to bite. What about Usain Bolt’s fans? Since some days, they can support the fastest man in the world by using the Boltmoji, the emoji representing Bolt.

In fact, Puma has launched on the platforms Apple and Android this new application that can be downloaded, Boltmoji indeed, that allows to add on your own keyboard images of the Jamaican athlete in his most famous poses and in the traditional poses of standard emoji.

Will this aid the athlete to achieve the third Olympic hat trick (100-200-4×100) in the third consecutive Olympic Games? We will see. Certainly, few people in the world can boast their own picture in the messages sent to their friends.

Moreover, if for the sport fans this would not be enough, Apple and Android announced that in the next days 72 new Olympic emoji will be added, just in time for Rio to be used, maybe, along with the Usain Bolt’s ones.