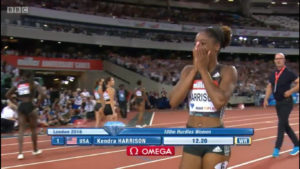 Just some minutes before the start of Usain Bolt on 200m ad the Anniversary Games Diamond League, Kendra Harrison made the crowd exploding running the new 100hs world record!

Initially the display was showing a finish time of 12″58, but some seconds later the result has been updated to 12″20, one hundredth better than the previous record.

Sad thing is she won’t be in Rio seeking a gold olympic medal because she didn’t make the podium at USA Trials.

Here the video of the race: