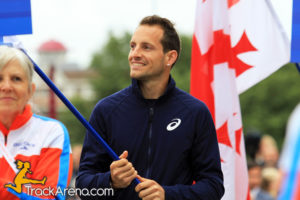 After the disappointment of the Amsterdam European Championships final, Renaud Lavillenie wanted to show that he is in good shape and the event was only a temporary flop.

Two days ago at the Meeting International de Sotteville, he boosted the gap with Sam Kendriks, USA athlete who owns the second world record of the season, cleaning 5.96m.

Reached the height at the first attempt, he tried 6.01m not succeeding in surpassing that wall; although, he does not chuck in the sponge and he will try again tonight in London, during the Diamond League.