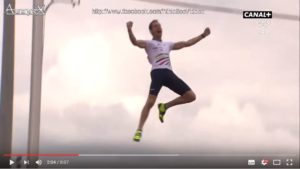 ”Le Roi” jumped again very high and, exactly, in the right moment. In fact, the French multi-champion was back to the track on Saturday for the second day of the Senior French Championships, that took place in Angers.

During a competition without any rivals, Renaud Lavillenie started with 5,75m. He cleared 5,85m at the first attempt and, already with this measure, he was qualified as champion since Kevin Menaldo, silver medal, jumped 5,80m. Therefore, the bar was moved to 5,95m, that represents the best seasonal result of the year, against 5,92m jumped by the American Sam Kendricks.

After the first unsuccessful attempt, “Le Roi” surpassed the bar: WL in a crucial moment, with the forthcoming European Championships in Amsterdam and the Olympic Games in Rio closer and closer. The Indoor World Champion then raised the bar to 6,01m, failing all the attempts. “I am happy I achieved this result at the French Championships. The two attempt at 6,01m have been amazing and I was close to surpassing that measure as well”, he said in front of IAAF microphones.

Jimmy Vicaut took part in the event as well and, after qualified for the final with a time of 9″94, he run 9″88 during the final itself (VIDEO), two cents more than his European Record of 9″86. He will participate in Amsterdam as a favourite as well, and who knows if he will manage to impose himself during the Olympic Games, that have not awarded “Old Continent” athletes since some years. 10″09 for Christophe Lemaitre in the battery; he was not able to run the final for a problem at the Achille’s tendon.

Teddy Tamgo, Moscow 2013 World Champion, managed to jump over 17 meters at the last attempt, reaching 17,15m, that made him win the competition. Unfortunately, during the jump he breaks his femur, erasing the Olympic Games from his agenda.