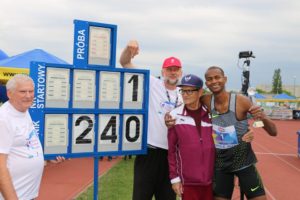 It looks like the Qatari athlete Mutaz Essa Barshim is back in his prime after that, during the Pool High Jump Festival in Opole, Poland, last Saturday he jumped the seasonal best once more, surpassing the bar set at 2,40m.

After a 2015 where he did not seem the Barshim who jumped 2,43 and after an equally disappointing indoor season, the Qatari started performing again after the Golden Gala in Rome and, already in Birmingham in the Diamond League leg, he had established the WL jumping 2.38 gaining the victory.

After the first jump of the year above 2,40, Barshim tried to jump twice that 2,45, Javier Sotomayor’s World Record which looked like he was about to crumble so many times until few years ago.