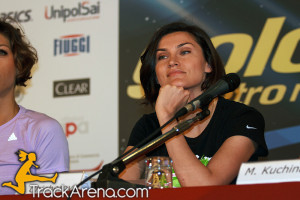 Some day ago WADA spread the news that the samples collected during the Beijing Olympic Games in 2008 have been re-tested and 31 positive cases have been found in different sports and countries.

Today, a Russian news agency announced the first name of the athlete suspected of having used doping substances during the Olympic Games; it is Anna Chicherova, high jumper who won the bronze medal in Beijing.

Her trainer, Yevgeny Zagorulko, said: ”Three days ago Anna received a notice that her sample of Beijing failed the doping test after the re-test. So far, it has not confirmed been, everything is still in progress”.

Anna Chicherova has a very respectable palmares; she won the first International medal in 1999 during the Young World Championships thanks to a jump of 1.89m and since there it was a downhill. The most recent medals are the World golden medal in Daegu (2011), an Olympic golden medal in London (2012), a bronze medal at the World Championships in Beijing (2015) and at the Moscow’s one in 2013. With a PB of 2.07m, she is on the third position of the All Time World ranking.

The doping wave that has swept Russia has not stopped, the country may be excluded by the Olympic Games; according to what TASS news agency  stated it seems that a large portion of the positive samples comes from Track&Field and 14 among them are from Russian athletes.