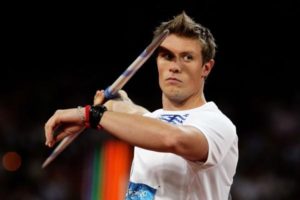 The announcement of the retirement from the sport activities of the Norwegian javellin thrower, Andreas Thorkildsen, was spread yesterday morning on his own Instagram profile.

The 34 years old athlete was fighting against many accidents that have been compromisineg his carreer since some year; for this reason, he decided to leave space to new protagonists.

Andreas surprised everybody, winning his first Olympic medal in Athens, throwing the javellin to 86,50m when he was only 22 y.o.. Everyone thought he was just a meteor in the throwing field, but soon other confirmations arrived as the second place at Helsinki World Championships the following year and the golden medal at the European Championships in Goteborg in 2006.

He threw the javellin eight times over 90 meters, including at the Olympic Games in Beijing 2008, where he won and set a new Olympic Record, still valid. He holds the National Norwegian Record established in Oslo 2006 with a 91.59m throw.

His last apparition in an International event was at the World Championships in Moscow 2013 and, since then, a long series of accidents started, forcing him to be out from all the world tracks for the whole 2014 and 2015.

He said farewell to his fans on Instagram in this way: “Have decided to end my carreer as a professional javellin thrower, it’s been a fun ride. Thanks for all the support these years. Thanks to everyone who have helped me along this way“.

Have decided to end my career as a professional javelin thrower, its been a fun ride. Thanks for all the support these years. Thanks to everyone who have helped me along the way.