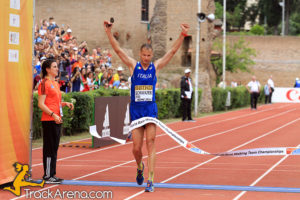 On the first day China won 7 out of the 8 awarded gold medals, counting team rankings too, for the two U20 races and both 20km men and women.

But climax reached the top on Sunday, during the 50km race, where Alex Schwazer won the gold medal after some days the end of a long doping ban.

TrackArena was present on the course thanks to our photographer Chiara Montesano. Clicking on the following link you can find all the photos she took during the competitions.