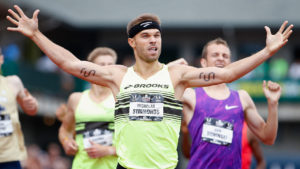 He did it again.

Nick Symmonds auctioned around 9 square inches on his shoulder for an advertisement space: where? Clearly on eBay!

The American middle distance runner is no stranger to this kind of offers since in 2012 he already sold a small area on his arm to HDC (Hanson Dodge Creative), a market agency; the price? Eleven thousands dollars. Symmonds, though, had to cover the tattoo for London Olympic Games. The results he obtained during that year for his campaign were nevertheless not bad at all.

Just some of the growth metric from the 2012 auction. Who will be this year's auction winner? #OwnYourSkin pic.twitter.com/FjfRVEsrLt

This time the part of the USA runner’s shoulders was won by the  CEO of T-Mobile John Legere, sport fan who, in the past, financed Nick Willis (middle distance runner from New Zealand) with money awards as well and who donated economic incentives such as the Carlsbad 5000m.

Symmonds will debute on the 14th of May for the Shangai Diamond League leg where he will compete in the double track lap. We will see how he will begin his olympic year.