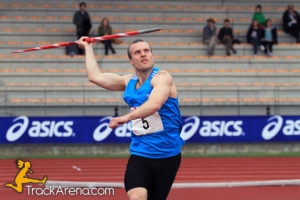 On the brand new track of the ”ASICS Firenze Marathon Stadium” the first day was mostly dominated by the Norwegian  Martin Roe for what regards decathlon and by the Nigerian Uhunoma Osazuwa for the eptathlon.

Roe got close to the PB in each of the first five events (100m, long jump, shot put, high jump and 400m) keeping the level of the competition very high. He started great winning the 100m, with a time of 10’82”. In the long jump Simone Cairoli shortened the distances on Roe achieving a 7.19 against the Norwegian’s 7.15; the challenge was nevertheless won by the Englishman Ashley Bryant with 7.43.

The second day turned out to be much more surprise full, with the competition basically decided by the last but one challenge, the javelin throw. Until that moment Roe was leading with 6410 points and he was ready to bring the victory home; it was his fellow countryman Lars Rise, who until that moment had collected 6288 points, to gift him with a bad surprise: with a 68.77 throw he collected 871 points, opposed to Roe’s 59.31 (and 727 points), thus conquering a gap of only 22 points.

During 1500m Roe tried to run away but there was nothing to do, Rise sticked to him and they closed with a second of difference which was not enough to fill the gap necessary for the victory. Norwegian double thus, with Rise (7868 points) and Roe (7855), whereas the third place went to the American Miller Moss with 7712 points.

The second day told a different story, with the Osazuwa accusing a slight drop in the last three challenges. In particular, the javelin and the 800m were fatal to the African athlete, and the athletes who were following behind her took great advantage of this.

The two-days competition was then won by Spinola with a total of 6100 points. The victory on the 800m was decisive to the Brazilian to claim the victory of the competition which, in the last stages, saw all the athletes at a few points of distance. Second place for the New-Zealander Portia Bing with 5987 points and podium completed by the Greek Sofia Yfantidu with 5953 points.

Following the heroes of the combined events on the track there was also our photographer Chiara Montesano, who did not miss the chance to narrate these two days of competition with her photos, which you can find clicking on the following link.