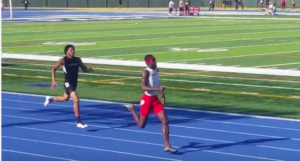 Tyrese Cooper: a name which never fails expectations. Despite being very young, this boy from Miami became a celebrity among the “college” athletes of the US because of his capability of continously crushing his personal limits.

In the last three days, Cooper displayed an enormous potential, not only winning all the races he qualified for, but also reaching a prestigious achievement: to run below 46 seconds on 400m.

Class 4A Region 4 Track & Field Meet, 28th of April: Tyrese Cooper opened his competition day with class, winning the 100m with the personal of 10”49, almost too easy.

Just when you thought it was safe to cross the finish line……WATCH "Mama There Goes That Grown Man Again in 10.49 SECONDS!! " #MGX HS Freshman Tyrese Cooper wins Class 4A Region 4 100m in his usual fashion #OnTheMuscle!!! The Homie had to run 7 events in one day just to make it to state. #TrainingToBeGreat has to be a way of life for this young Man! #ToGodBeTheGlory!

Two hours later, under the incredulous public’s eyes, the Miami sprinter gave all himself on the 400m, pushing in the final part as well. Final time: 45”94, new PB and Freshman record for Cooper, who gains 49 hundrenth of seconds to his previous record. There are no words aparto from extraordinary! The path looks the right one to aim high, towards the youth records, where Obea Moore’s 45”14 still stands followed by the 45”24 by Kirani James, established in Bressanone in 2008.