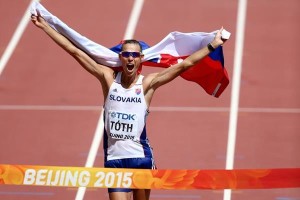 It is less than one month left to the IAAF World Race Walking Team Championships in Rome, the former World Cup where the strongest racewalkers of the world will compete.

The 2015 50 km World Champion, Matej Toth, will not be present though. The Slovak got injured to the tibia and had to slow down his preperation. Now he feels much better but having skipped most of his trainings he prefers not to risk taking part to the competion.