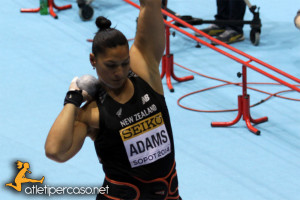 Valerie Adams has no room for kindness during her interview by New Zealand Herald and when asked about she serenely states to be extremely in favour of Russia’s exclusion from Rio Games.

Adams suffered this scourge as much as any other athlete: defeated by Nadzeya Ostapchuk during London Games, the New Zealandese did not have the pleasure to receive the medal on the highest step of the podium and she had it delivered “by mail” after the Bielorussian rival was tested positive to doping.

“I am in favour of this“, Adams stated about the possible Russian expulsion. “People talk about ‘innocent athletes’ but this is bigger than individuals. If we don’t take a radical decision we will never manage to win. If people at federation high levels show themselves as willing to help, we will never get out of this situation.”

“People may think I am heartless, but this is sport. This is not my fault. It’s theirs.”

The aversion against doping is comprehensible according to Valerie Adams. She is the only woman to have ever won four shot put titles in a row during World Championships, but her best performances are historically nor much significant, and she is only 23rd in the all-time list.

The first 8 all-time performances were obtained in a time span ranging from 1976 to 1988, years in which the massive use of doping substances was not a secret. This phenomenon of course is not spotted only in shot put but also in other sports, where the ’80 can be considered as something alien for the female category.

Will Valerie Adams have her desire of not seeing Russia compete realized?