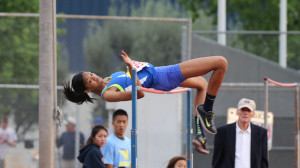 Vashti Cunningham is the youngest athlete winning a world indoor title ever; during the World Championships in Portland she surprised everyone snatching the victory out of the hands of great athlete as Ruth Beitia with a jump of 1.96m. After the success obtained, she has soon signed a contract with Nike that allows her to turn professional.

The first event she will deal with as pro is the forth stage of Diamond League in Eugene during Prefontane Classic that will take place on 27 and 28 May; the event will be at the same level as Olympic Games in Rio since the best high jumper, as Alessia Trost, will compete there as well.

Ruth Beitia, Kamila Licwinko, Marie-Laurence Jungfleisch and Airine Palsyte will be presents as well, all of them with PB between 1.98m and 2m.

It will be a good opportunity to see the conditions of the athletes in view of Olympic Games considering that, most likely, they will be the protagonists of the event challenging to achieve a place on the podium. We will see if Alessia Trost has recovered after a bad period for her condition when she was jumping quite lower than usual.