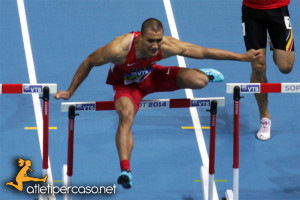 Eventually, the host team has been officialised as well. Quantity and quality seem to be the synonymous for what regards the American team.

The eyes of the whole sport hall and all over the world will be pointed at the athlete who is breaking all the records, Ashton Eaton. His seven events will keep the Track&Field fans glued to the screen: when he is on the track, every record dreads.

The 60hs is a quite awaited event by the USATF fans too. The probability to see three American flags on the podium is really high because of the presence of three amazing hurdlers: Brianna Rollins, Nia Ali and Kendra Harrison.

The performance of Tori Bowie on 60m is expected as well since, despite the ruthless competition, she could reach the podium. In the male run, Trayvon Bromell and Michael Rogers, alias “the young and the old man”, will try to predominate.

Omar Craddock is another athlete the public want to see in action; he will try to achieve the world title arousing the curiosity of the public about the glasses he will dress, after the extravagant ones of the last season.

The American middle-distance team will try to show its quality, also in view of the Olympic meeting, attempting to scare the African athletes. The young 800m runner Erik Sowinski (born in 1997) has been charged with this task along with Matthew Centrowitz, 1500m, and Ryan Hill, 3000m.

The two quartets of 4×400 are aiming at the world title as well and, even though they lose their value in comparison with the outdoor relay (just think about the absence of Allison Spencer in the female relay), they have good hope thanks to the times of the 400m runners that will try to get the title in the individual event, such as Ashley Spencer for the female and Vernon Norwod for the male.

To sum up, the Star and Stripes team does not want to let down anyone, being under the obligation to predominate the medal table.

Below, the complete team.