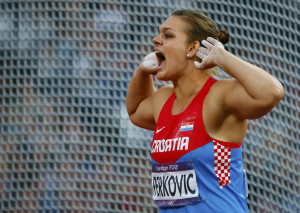 As the saying goes: good things come in three. In fact, Sandra Perkociv, one of strongest and most regular discus-thrower, opens the season, for the third time in a row, with a throwing over 70 meters.

Perkovic inflamed herself and the public with an amazing throwing of 70,59m, at the National Winter Throwing Championships in Split.

This is Sandra Perkovic’s second best performance after the 71,08m throwing which made her winning the European title in Zurich in 2014.

“There is still a lot of things to order. My target was to achieve the first place in the current world ranking, and I succeeded for two meters” Sandra Perkovic said.

“We are going to defend the European golden medal, the Diamond League title and, then, we could stay the pace of Olympic Games. Sandra have predominated throughout the most important international tournament for five years and she put various medals round her own neck…I know, we have been spoiled with the golden medal, the silver one and all the celebrations. We hope we will be in good health to pursue towards the way of  success since the battle for the Olympic golden medal will be run on the 70m edge” Edis’Elkasević, the thrower’s trainer, stated.