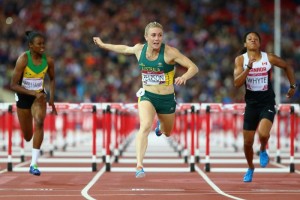 It seems the bad luck does not want to leave the greatest hurdler ever.

After the accident at Golden Gala and the connected surgery at the wirst, Sally Pearson came back to train regularly, posting video on Instagram of her progress, also running 200m with a great endurance.

Pearson planned to get back into action with 100m and 200m in Canberra, but, unfortunatelly, the body pains appeared again: one of the two Achilles tendons knocked at the door, make itself feel with a strong and stabbing inflammation.

The nasty event completely changed Pearson’s plans, who, reluctantly, will have to renounce Indoor World Championships in Portland.

“I would have had my body extra-ready for Portland, where I was aming at winning. My body cannot withstand this kind of stress twince in a year“. These are Pearson’s words, released to a Sidney newspaper.

Although, he most worrying thing is the time span that will pass before the hurlder could come back to track. According to the news, Pearson will be able to tread the track just a month before Rio, a race against time that could be ruinous for the Olympic performance of the Australian athlete, who, in any case, trusts she can give the best on the track of Olympic Games.