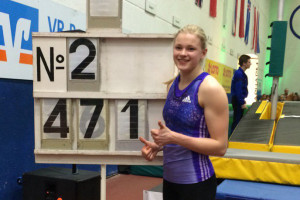 The main characters in the female pole vault seem to be in a great shape in this period; after Jenn Suhr’s World Record, Wilma Murto set a new Junior World Record.

The Finnish athlete set the European U18 Record in December with 4.45m, now she passed in the highest category, she did not want to wait so much before seeing her name in the record book so she smashed the Junior World Record of 4.64m set (outdoor) by Eliza McCartney in December.

This weekend in Zweibrucken, Germany, after a progression of 4.25m, 4.35m, 4.45m, she asked to rise the crossbar to 4.65m surpassing by one centimetre the World Record but, not glad, she managed to jump also 4.71m. Later she tried 4.77m but not succeeding in overcome it in the end.

Wilma Murto risked not to take part to the competition since her poles did not arrive with her flight, fortunatelly she received them almost before the beginning of the event.