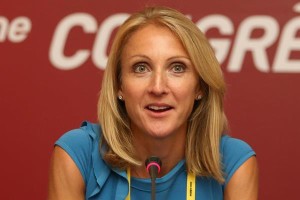 The world of Track&Field is fragile in this moment; the doping scandal caused the credibility of the sports queen to drop drastically. More and more cases come out and more medals, titles and awards are revocated.

Everyone is wondering how to get out of this situation, how to lift a sport which still has a lot to give and which does not need that people poison a pure world for their own purposes.

UK Athletics wrote a “Manifesto for Clean Sport“, a manifesto for a clean sport, a provocation to open a debate. It is about some requests which would result in more transparency such as a public register owned by WADA in which it is possible to check all the antidoping tests done by athletes; if WADA did not agree on creating it, then UK antidoping and UK sports will for their nation. A 8 years disqualification is also asked for all athletes making use of doping substances so that he/she would be forced to skip two Olympic Games. But the proposal which led to more discussions is deleting all the World Records.

Looking back, the doub that many of the WR established were falsed arises, especially those done during the Cold war period in which doping was a very common practice; Ria Stalman‘s statements are very clear about that. But is this the real solution?

In this way many clean athletes who ere able to overcome their limits with effort and sacrifice would be punished too, culprits would be hit, even if we only have suspects until now, but above all innocents would be condemned too. Paula Radcliffe immediately rose againts this statement “I will never be in favor of this decision because I know for sure that at least one of these records has been done by clean athletes (she has been owning the WR in marathon since 2003, editor’s note), this means that others are as well”.

Ed Warner, UKA President says to be happy about Radcliffe’s position because his intention was indeed to open a debate and provoke IAAF in order to find a way to create a clean sport.