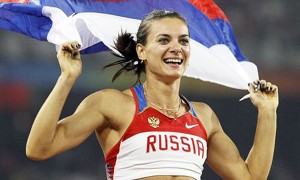 After the Russia’s temporary suspension decided by IAAF, who risks not to take part to the next Olympic Games in Rio, Yevgeny Trofimov’s voice strongly went up.

The trainer of the pole vaulter and world record holder, Yelena Isinbayeva, started to investigate the possibility to allow her athlete to partecipate under the Olympic flag since he thinks it is not fair to bar from the Games all the Russian athletes, not making any differentiations. It will be a gesture punishing the “clean” athletes too and violating the presumption of innocence principle.

The International Olympic Commitee makes known it will look into the possibility to allow the Russian athletes who will fail the dope test for illegal substances to take part the Olympic Games.

Thus, there is a new possibility for the Russian athletes who have nothing to do with doping substances; with a good chance, as The Telegraph wrote, they might leave for Brasil as indipendent athletes if the Russian Federation will not be ammitted again in IAAF.