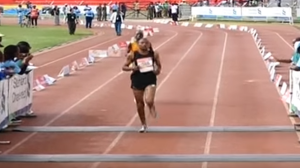 Most of the best runners of the country and the whole Africa met on the Kenya capital’s streets in order to compete in a great race with nourishing pickings.

The finish line was set within the Nyayo national stadium and the first runner glimpsing the victory and smelling the parfume of the prize was Joshua Kipkorir, with 2 hours 13 minutes and 25 seconds.

A few instants later, Shadrack Kiptoo seemed to be headed to the second place and to the 7000 dollars to be won for the silver medal when Julius Njogu came from the rear with a boldness action, an incriedible sprint after 42 km. The overtaking is inevitable: Njogu is silver, Kiptoo bronze.

While Njogu was lining to get the prize, he was stopped by the authorities: in fact, the 28 years old runner had not started the race along with the other athletes, but he had ably sneaked in 1 km before the arrival line, as his not tired aspect denoted.

Njogu also tried to dissimiluate taking off his shoes to show his feet condition, but the directors’ analysis vanished every doubts. Now Njogu, after being arrested, should be charged with fraud by authorities.

To play the phoney overtaking, you just need to press “play” below.