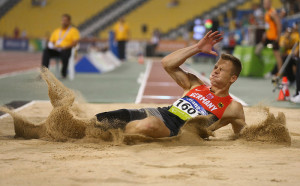 Markus Rehm, German long jumper with his right leg amputated, shone in the Paraolympic World Championships. which are taking place in these days in the Qatari capital, Doha, with an absolute performance in the long jump.

Clearly, Markus Rehm now claims his right to partecipate in the next Olympic games which will start in August in Rio de Janeiro. IAAF still has to make a statement on this possibility, which is going to be discussed for the next months. It is for sure that Oscar Pistorius created an important precedent, even if the debate on the possibility of having advantages or not using artificial limbs is still open.

In the next few months we will know if the best long jumpers of the World will be sided by the 27y.o. German.