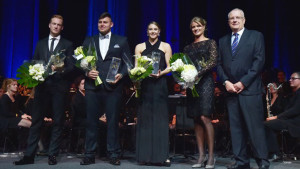 Every year Lausanne, home of the Athletics European Federation, hosts the awarding of the Year’s Best European Athletes and the appointment of the Rising Star price dedicated to the most promising young athletes who shone during the year.

There were no rivals for Dafne Schippers, class 1992, in the race to the title after this stellar 2015 which saw her on the highest step of the podium at Bejing World Championships after having dominated the 200m, and on the second place in 100m behind the great Shelly-Ann Fraser Pryce. The gold achieved had even more value since the time, 21’63 is the third best ever and the new European Record.

But the gold won in the Championships was not the only one in the season since the Dutch athlete also won 60m in Prague during Indoor European Championships. Her choice to drop multiple events to dedicate herself exclusively to the velocity definitely resulted as a winning choice. This is her second victory in a row as European Athlete of the year, the first woman to receive such award for two consecutive years.

The men’s title goes instead to the long jumper Greg Rutherford who, with his victory in Beijing, classifies himself as the fifth athlete in the history to win the title in all the outdoor competitions: Olympic Games, World Championships, European Championships, and Commonwealth Games.

The female rising star’s name is  Noemi Zbären and she is the U23 European Champion on the 100hs; in Tallin she won the final improving her PB in 12”71 to then run the final in Beijing and placing herself in the 6th place in 12”95.