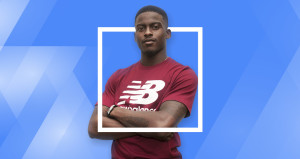 Trayvon Bromell, the 20 years old sprinter who won the bronze medal at the World Championships in Beijing in the end of August, signed a long-standing contract with New Balance, his new sponsor which, therefore, allows him to become a professional for all practical purposes.

By contrast to Andre De Gasse, who decided to prosecute and to carry his scholastic career through, the first USA athlete from High Schools who went over 10 seconds in 100m as well as the holder of the new junior record with 9″97, chose to become a professional to all intents and purposes.

His new agent is Ricky Simms from PACE Sports Management; you may likely have heard about him since Simmus is, above all, His Majesty’s agent, i.e. Usain Bolt the multi Olympic champion and multi world record holder for velocity event.

Moreover, Bromell has been the first USA teenager of the history who qualified for a World Athletics Champions after a second position at Eugene’s Trails with the time of 9″84. “After the World medal in Beijing, I knew I could have received a good contract“- the runner said – “Along with my family, I decided this would have been the best decision in this moment. I could not have risked waiting for one more year: an accident would have been enough and my value as athlete would have dropped. The contract I signed is a valid contract and I thank New Balance, hoping to start my training for the Olympic year to the best”.

Furthermore, it has to be underlined the decision taken by the brand New Balance to sponsor a sprinter: Trayvon Bromell, in fact, was the only one among the four male 100m medals in Beijing who has not been sponsored by Nike. Ricky Simms expressed his opinion about that as well: “I think it is the right moment for New Balance to enter in sprint events. They were keen on having him among the athletes wearing their brand and Trayvon has already met a shoes designer. In two years, it will be interesting to see how the brand will develop with Bromell’s collaboration.”

Finally, the young runner stated: “I am not going to spend all the money I will gain immediately, the only thing that really matters is to train to my best for the next season. I will keep living in Waco, Texas, and training under Mike Ford.”

Now, in Brommell’s plans there are indoor races, such as the World Indoor Championships which will take place in Portland, Oregon. The runner, known since he is used to have on middle-distance shorts for the velocity races, promised he will not change his clothes: “I will be the same Trayvon everyone knows, but with top shoes on my feet!”