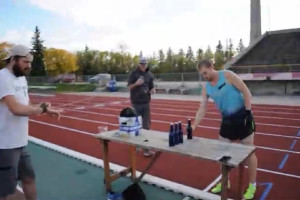 It is an already famous event which even famous athletes have tried.

The specialty’s World Championships have already taken part, making it more and more famous in the last few years: we are talking about the “Beer Mile”, a race which consist of 4 laps in which the athlete has to drink a can of beer at the start and, later, at the end of every lap completed.

To take part in this challenge there was even Nick Symmonds, the 800m runner from USA who, though, did not manage to get the same results he has in the double lap. Once fame was reached, rules for this event have been standardized worldwide and, nowadays, there is only one time ranking with a “world record” even: starting from the best time scored by James Nielsen (4’57”0) on the April of the last year, the time limit has later been lowered by Josh Harris (4’56”2), and finally by Lewis Kent (4’55”8) in August.

Although, Kent’s record did not last much because, on Saturday, Corey Gallagher, already winner of the World Championships in December in 5’00”2, established the new world record ending the 4 laps in 4’54”38 at the University of Manitoba.

Here are the video of Gallagher’s performance:

Gallagher’s one is thus the new record to beat, but it will not be easy for opponents, because the new record holder has already announced to want to train even more for the next Beer Mile World Championships: whoever believes to be able to steal his title just needs to fly to Austin (Texas) and compete on the 1st of December.