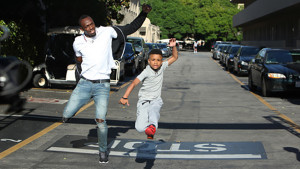 nfortunately, bullism exists everywhere. Thus, Demarjay Smith, a 8 years old Jamaican kid decided to start training in order not to be unprepared in case someone would trouble him, as it happens to kids in his district.

In few time, he became his friends’ personal trainer and the videos of his trainings got so much viral that he made to the TV as well.

In this interview he tells his story and when the interviewer asked him “What would you like to do when you grow up?” he answered “I would like to be a personal trainer, a basketball player and, since I like running, I would like to challenge Usain Bolt“. The interviewer then asked back whether he thinks he can beat him and the answer was “100% sure!“.

At this point Bolt comes up and the challenge gets alive! Guess who will win…