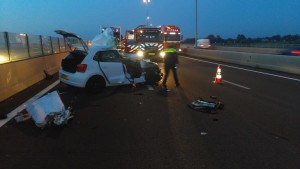 Last Friday evening on the A50, close to Arnhem, Hollande, a smash between a car and a truck occurred; the Dutch runners Churandy Martina, Hensley Paulina e Terrence Agard were inside the car.

The details of the accident are not quite clear but, in order to get the athletes off from the car it was necessary to cut a portion of the top of the car. It was a nasty accident but, fortunately, it ended in the best possible way.

Martina and Paulina were released after the routine checks, while for Terrence Agard it was more complicated. He broke one vertebra and he will have to attend from 3 to 6 months of rehabilitation.

“Now I can walk again, talk and even brush my teeth – Agard wrote on his Instagram profile – it is a miracle we survived the accident“.

First of all I would like to thank the lord for being alive today, your life can just change in a blink of an eye. Im so happy and grateful that it is going better with me now, I can walk again, talk and even brush my teeth ( Yes, brush my teeth) things I took for granted now means the world to me! According to the doctor it is a miracle that we survived the accident. Thanks to everyone that kept me in their prayers the ones that texted call and visited me, you guys mean a lot to me, and of course my Family for being there for me. Special thanks to atletiek unie and my manager ( the best) Joan Ave @flo_joan It will take me 3 to 6 months for a full recovery, looking forward for this new challenge.. Always positive and I know that I will come back stronger.🙏🙌💪 #dios ta grandi #blessed #miracles #YuDiDios #roadtorio2016 @javieragard @rhagard @lee_marvin @taylored2jump @martina200m @iamtrackpow