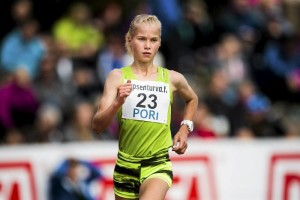 Has the heir of legendary Paavo Nurmi arrived?

The question is licit since yesterday a Finnish 17 years old young athlete ran an extraordinary performance…during the marathon.

During the Kullervo Marathon of Joutsenon, a little village in the South of Finland, Alisa Vainio beat the competition finishing the 42,195km in 2h33:24, doing better than the first man and leaving the second women 1h and 25 behind.

The low level of the event, though, gives value to the performance. The time achieved by Vainio, who won the bronze medal in 3.000st at the European Junior Championship this year, places the athlete at the sixth position of the all-time national lists, but above all, it is faster than the entry standard for Rio 2016.

Unfortunately, she will not be able to take part to the Olympic event since she is not eighteen yet. In fact, the Olympic committee introduced a age threshold for the partecipation of the Marathon and the 50km Racewalk in order to preserve the young athletes from this tough disciplines.