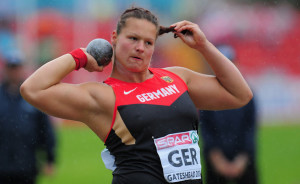 The best results of the ISTAF meeting in Berlin come from throws, but the races started immediately with the best world performance ever on the anormalous distance of 2000 hurdles. The Kenyan athlet Virginia Nyambura Nganga set up the best time ever with 6’02”17 , along with her compatriot Beatrice Chepkoech (6’02”47), who managed to go below the previous record of 6’03”38.

Christina Schwanitz, still unstoppable, put the shot at 19,66 winning against Michelle Carter (19,19). The other German athlet, David Strol, had to surrender to Tomas Walsh: 21,47 against 21,19.

In the pole vault a little tragedy occurred. The athlet who gained the silver medal in Beijing, Raphael Holzdeppe, went out of the contest because of three mistakes in the entrance jump of 5,54. The same was for Renaud Lavillenie who did not get a placing because of two mistakes in 5,54 and 5,64. The world champion, Shawnacy Barber, did just a little better, succeeding in jumping 5,64 metres. So, the one who took advantage of this was the Polonian Piotr Lisek, who got out of the contest as triumphant along with the Greek Konstadinos Filippidis. Both of them jumped above 5,74, but the first one committed one mistake less.

There was no challenge at all in the long jump, despite Ivana Spanovic being neatly below her latest performances. A 6.60 jump was enough to impose herself over the others, even renouncing to do the last two jumps.