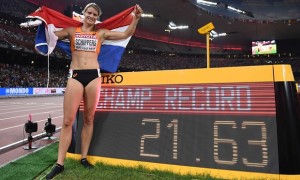 It was in the air after the great final in the 100m and Dutch girl did not fail all the spotlights pointing at her. Neither Fraser Pryce or Felix were present, but maybe they could not have done anything anyway against the great race management of Dafne Schippers.

At the shot, the starting is slower than the rest of the group, especially compared to Elaine Thompson’s; the surprise of the Championships immediately goes ahead keeping a high frequency without getting any perturbed. But, close to the arrival, Schippers started to weave her inescapable masterpiece.

The come back is thrilling, step after step after step, Schippers close the gap with Thompson thanks to her incredible pace, until they were should to shoulder and, a few meters to the arrival line, her shoulders went ahead, stopping the stopwatch to 21”65, later lowered to 21”63, quite an important time: Championships record, third time ever behind Joyner’s and Jones’ and, most importantly, European record, crushing the historical Marita Koch’s 21”71 which had been resisting since the 10th of June 1979.

Schippers’ result tosses her definitively in the Olympus of the velocity; she from the Old continent, in a world made of Caribbeans.

Great time for Elain Thompson as well, who runs in 21”66: a final of the World championships had never been run so fast.

Who knows if Dafne Schippers will try to take Koch’s time on 400m as well, the unapproachable 47”60 (WR); we will see! As for now, watch again the masterpiece of this might and still young athlete.