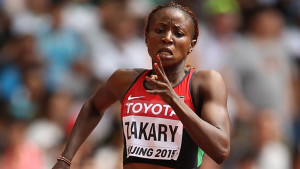 The medal collection leave no doubts, Kenya is the country which won the biggest amount of medals at Bejing’s World Championships until now.

Winners can be found in basically all the specialties, ranging from mid-distance races, where they are undisputed champions, to the javelin, without forgetting 400hs. Even though, Kenya also holds a negative record as well: two athletes have already resulted positive to doping.

We are talking abou Joyce Zakary, National record holder on 400m who pulled back during semifinals and Francisca Koki Manunga, specials in the 400hs.

The two athletes have been found positive to nandrolon, an anabolising steroid and they have been temporarily suspended by IAAF while spor justice judges the case.

Moreover, IAAF is waiting Kenyan Federation to make its own anti-doping laboratory compliant to the international laws, but it looks like a very long operation. In this moment, Kenya has 13 athletes who are expiating a suspension because of doping.