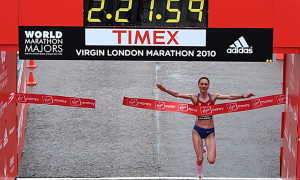 London’s Marathon 2010, the winner is the Russian Liliya Shobukhova but in 2014 the Russian Federation states to have found some anomalies in the biological passport of the athlete.

Once the positivity to doping was confirmed, victories obtained since 2009 are erased, which means three victories to Chicago’s  Marathon and on London’s one; moreover, she is forced to a 2 years stop from the Russian Federation, later incremented to 3 years following an appeal from IAAF.

The Russian athlete has then decided to collaborate with WADA and provided the documentation and the information necessary to the investigations which further led to the discovery of new cases of doping. Following her collaboration with WADA, it was decided to reduce the sentence of the athlete by 7 months with the conclusion being on the 23rd of August 2015.

Since now, Shobukhova can come back to track; “Miss Shobukhova – it is written on WADA web site – got close to WADA in May 2014 in order to provide substantial assistance according to the law. Since the beginning, she admitted to have committed a breach to anti-doping laws. Information and documentation she provided have been fundamental to discover and investigate offences to anti-doping code committed by other athletes, including the support staff of the athletes. WADA thinks information supplied by Shobukhova is very relevant in order to clean the sport“.